Joe Rogan, Conor McGregor and Ronda Rousey Made the Cut 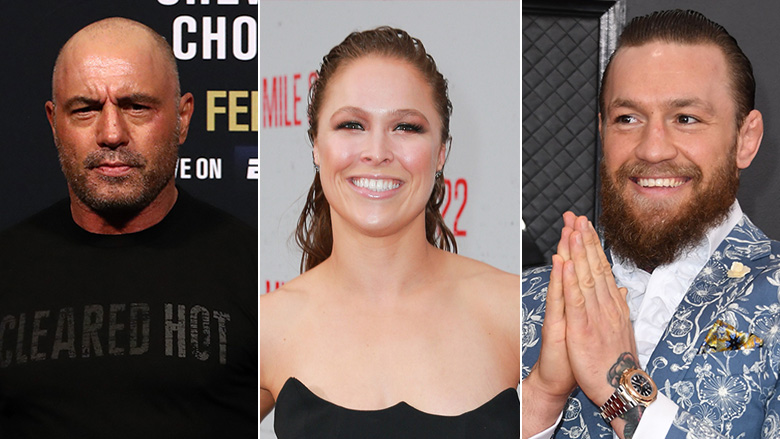 Legendary announcer Mike Goldberg called the action for UFC from 1997 to 2016, so he has lots of memories to choose from whenever he’s asked the inevitable question about what his favorite moments with the company were. Goldberg revealed to Heavy in an exclusive interview that the ones that come to his mind most often these days are the special memories he has of working alongside Joe Rogan as well as watching the incredible rises of Conor McGregor, Ronda Rousey, and other UFC stars.

While Goldberg refused to name just one moment or memory from his UFC days as the best one, and instead suggested that it was “the journey” that was most special and important to him, he also offered a pretty strong list of incredible memories.

You can be sure Rogan, McGregor, Rousey, and several other stars all made the cut.

You can watch Heavy’s chat with Goldberg below.

ALL the latest UFC news straight to your inbox! Subscribe to the Heavy on UFC newsletter here!

Goldberg’s career with the UFC began at UFC 15.5. During those days, the company was a far cry from what it has become today.

Goldberg remembers calling cards for sparse crowds at small venues all over the country.

“…Joe [Rogan] and I used to joke about, ‘wow, this isn’t Casino Magic in Bay St. Louis anymore’,” Goldberg said.

So Goldberg was there to see the incredible growth of the sideshow circus act the UFC was back then to the company becoming one of the most popular sports franchises in the world.

“I remember going into SkyDome in Toronto, 80,000 people…We were like ‘wow, this is crazy!’,” Goldberg said.

Before it was all over for Goldberg in the UFC, he had witnessed some remarkable events.

“Then to go to Abu Dhabi, and they build a stadium for us, we do it outside, and then they tear it down the next day…BJ [Penn] was upset by Frankie [Edgar], Dana [White] was upset by the main event as you remember, but the journey at the UFC…,” Goldberg said.

Goldberg remembers the finale of the inaugural season of “The Ultimate Fighter” reality series, and the epic slugfest that happened between Stephen Bonner and Forrest Griffin. That turned out to be one of the most important fights in UFC history because it galvanized the brand during a difficult time in front of a new crowd.

“Stephan and Forrest will always be a great moment. I remember looking at Frank Fertitta right after that and saying, ‘Two! Two contracts! You’ve got to give them both a contract!’,” Goldberg said.

He continued, “Then things like UFC 200, things like our first trip to Madison Square Garden, watching Ronda take over and watching the masses surround Ronda was amazing.”

Goldberg also mentioned the incredible spectacle of seeing how many fans would show up to see Conor McGregor.

“Obviously, Conor, there were weigh-ins…that had as many people in the crowd for Conor…in the States where you would have thought we were in Dublin,” Goldberg said.

Recently, Goldberg attended UFC 263 as a fan. While at the fights, he noticed many of his calls were still prominently featured on the pre-fight hype video the UFC shows fans before the action begins on fight night.

“It means a lot to me, though, to be part of all those seminal moments…those will never go away. They will always be part of my journey. They are things that I’ll cherish and things I’ll never forget,” Goldberg said.

Goldberg called the fight for the UFC for 19 years and Bellator for the following five. But now Goldberg is on a new journey in the suddenly quite popular world of bare-knuckle boxing.

BYB 6 takes place at the Seminole Hard Rock Hotel & Casino in Hollywood, Florida. The bare-knuckle boxing card is scheduled for July 16, and it will be streamed live via YouTube.

You can see more info about BYB 6 below.

Goldberg witnessed the rise of the UFC, and now he believes he’ll see another company do something similar.

“They have a product that can take off and take over because there’s a shift to this bare-knuckle world,” Goldberg said.

His perspective will also remain the same.

“Another journey…because that’s what this really is…I’m going to enjoy the journey.”